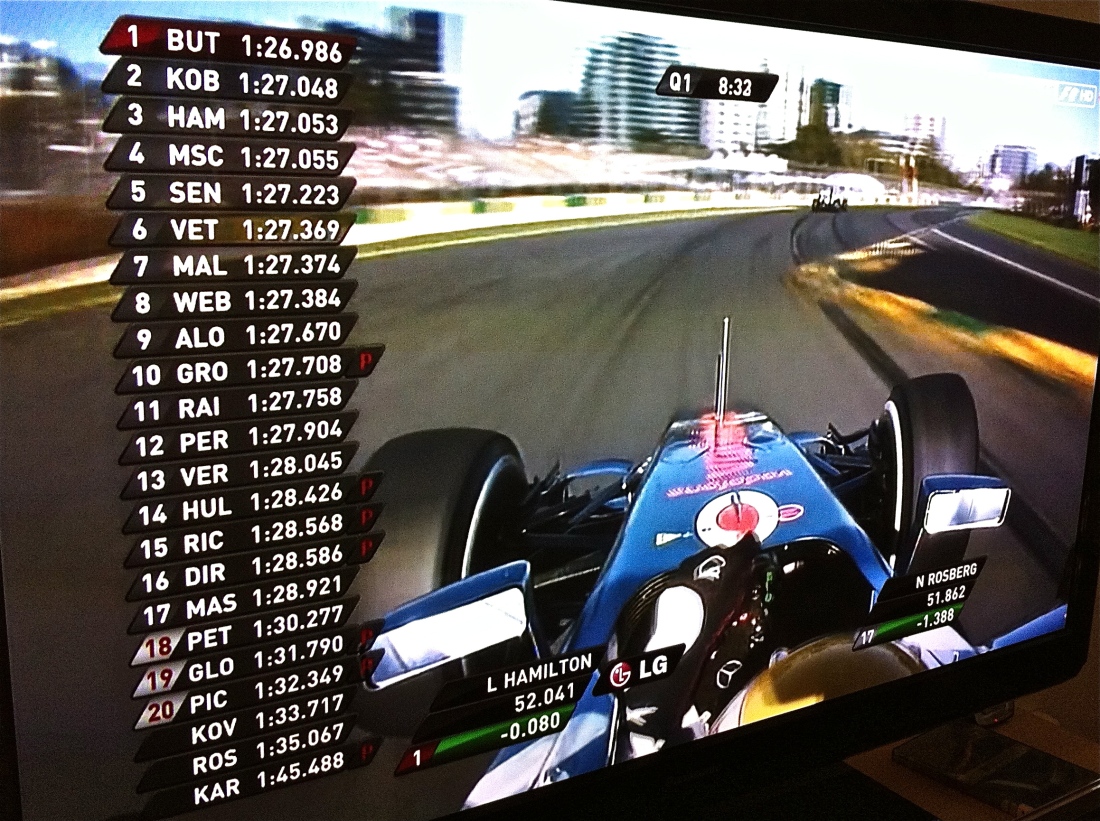 My 12-year-old Sony WEGA flat tube TV finally died in January, 5 1/2 years after Robert Scoble told me to ditch it and go HD. The new TV is glorious and I love it far more than I should, but what’s making me write about it today is the start of the 2012 Formula 1 season.

When Scoble and I discussed HD in his living room back in 2006 I told him I didn’t need HD until F1 started broadcasting in HD. That started last year and now I’m able to experience the full force of HD racing. I’m stunned. It’s absolutely gorgeous and I can’t go back to watching on a laptop screen or an SD set. I’ve seen football, baseball, soccer and NASCAR in HD and none of it did much for me.

Exciting? Not for me.

F1, however, when I can see the tire tread in detail, the detail in the grassy runoff areas and the in the rooster tail spray, it’s just unbeatable.

By Sony standards, the 12 year life of my WEGA was short. I really should have gotten at least 20 years out of it but I’m so glad it’s gone. My Panasonic ST30 is miles better in every way.

Even better, my 2006 cost analysis was far different from the 2012 reality. The screen was most certainly not $4,000 and I didn’t need all of the upgrades I originally anticipated. Cutting off cable TV 2 years ago made a huge difference, since we already had an HD Roku and didn’t need an HD TiVO or cable box and the XBox was long gone. In the end, we grabbed the new TV, a sound bar, some cheap cables from Monoprice and a blu-ray player. All in, the cost was a fraction of my 2006 estimate.

And this weekend’s F1 season opener in Melbourne is making it all worth it.

You were right, Robert. Thanks.

As usual, Mary woke up this morning saying, “I want to watch Dora with my Daddy.” Hard to turn that one down. Seeing as today is not a school day, I gave in. We turned on the TV and check to see if TiVo had retrieved a new episode for us and, sure enough, it had.

But wait, what’s this? An hour-long Dora? Something’s amiss here. New opening sequence. Sappy(er) songs, something about “Friendship day.” The first 10 minutes appear to be designed to get kids to buy friendship bracelets. Ugh. She travels around the world to “save friendship day” by replacing everyone’s bracelets (that glow when everyone wears them, btw). Paris, Tanzania, Russia, China…. oh god. It’s a show about liberal white guilt. Dora even performs a “super jump” to get over the Great Wall.

Even Mary looked up at me and asked what happened to Dora.

Count me among those who still don’t “get” HD. I’ve seen the demos and I’ve seen friends’ HD sets (not as nice as yours, though) and I still don’t get it. In fact, I was in the Sony Style shop at University Village last week getting a Blu-Ray demo on their brand new demo unit and walked away shaking my head (even after the excitable young fellow from Sony showed me the Kill Bill HD/SD split screen about five times). I don’t see it.

Usually I’m a guy who latches on to new technology as soon as I see it. What did Chris Pirillo call us last year at Gnomedex? The Lunatic Fringe? I haven’t seen the light when it comes to HD. Yes the picture is pretty, yes it’s crisp, yes it’s big. But $4,000 for a television? Either you’re the one smoking the good dope or I just need to be educated.

Can you explain why HD should matter to me? I have a 2-year-old in the house so TV time for us adults is limited. The TiVo always finds us nice stuff to watch and I’m fairly happy with the 26“ Sony WEGA CRT screen I have now. So to enjoy HD I’d have to get:

Is that about right? Again, why should HD matter to me? (maybe it shouldn’t?) I’ll be at Gnomedex next week and I’d love it if you could explain it to me, Scoble. Just what Julie needs: me coming home drooling over a $4,000 television. Sort of makes my current $130 DS Lite jones seem like an easy sell, no?

It dawned on me today that my near-total lack of interest in sports will forever cripple me socially. As I was leaving my chiropractor today he said, “Have a great weekend. Go Hawks.” So empty is my sporting knowledge and so off my radar are professional sports, that I briefly wondered, does he think I’m a birder? Ah wait, no, he must be talking about the Seattle Seahawks. “Yup, you, too” was all I could muster.

I spent most of the week at our corporate headquarters on Bainbridge Island where the big topic for smalltalk was also The Hawks. A few months ago it was the Seattle Mariners. Either way, I’m unable to partake.

How is it that I can be so completely disengaged from something so pervasive that it pops up in a visit to one’s doctor or in every conversation in a building filled with 75 people? It seems somehow un-American and not at all manly. Worse, it tends to impede the sort of social bonding that is important in American business and culture.

The thing is, I’ve never really been interested in sports. Oh sure, I played soccer and baseball as a kid but never with any real passion. My dad once took me to a local boxing match but I went looking for the doors as soon as blood started flying. (Don’t believe me? Just ask him, he loves to tell the story)

As I drove home from the chiropractor tonight, I told myself that I needed to at least be somewhat literate in popular sports. It’s time to subscribe to some basic sports news feeds, I decided. Then, reality set in: I won’t read them. The feeds will refresh and the little unread number will climb until I look around to make sure that nobody is watching, select the feed and Mark All as Read. I can’t even summon the energy to read the headlines.

I’m not a total sports idiot, though. Earlier this year I decided it was time to get back into the one sport that ever really held my interest: auto racing. Thank god for TiVo – I spent the summer watching time-shifted Formula 1 and Le Mans Endurance Series racing as well as a bit of stateside driving. But even this doesn’t elevate me out of the category of the sports-challenged. Nobody at the water cooler wants to hear about Alonso’s pass on Raikkonen at Spa’s Eau Rouge when they could be talking about… um… somebody catching a ball in some overpriced stadium.